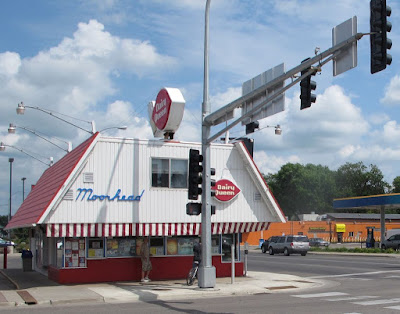 MOORHEAD, Minn. — The Dairy Queen in downtown Moorhead has been thumbing its nose at corporate HQ pretty much since it opened in 1949, despite some efforts from the home office to have the store mind its Ds and Qs.
And it's a recipe that seems to be working for one of the few DQs in the country still operating under a 66-year-old contract that allows them to dish up throwback treats alongside the standard corporate-approved items, a combination that turns Main Avenue and 8th Street into a hopping, slightly retro summer hangout.
Though the restaurant shuts down in the winter and unlike newer shops has no indoor seating and no drive-thru, customers gladly line up on the sidewalk for frosty treats no matter what the weather. Two years ago at least 1,200 people showed up on opening day, March 1.
The temperature was 11-below.
Why do they do it? Tradition, generous portions, reasonable prices and treats you just can't get at most other shops help. And in an era of corporate ubiquity, it's a subtle reminder that sometimes different can be delicious.
Diann Mikula, 78, has been visiting the shop since the year it opened. And along with her husband, she continues to make almost daily pilgrimages there, even though there are other DQs across the river inFargo, North Dakota, where she lives.

"They don't even need an inside place to eat like they have in Fargo," Mikula said. "They are good to their customers. They are so generous with their product. They don't skimp on what they put in your treats."  While newer contracts stipulate adherence to strict corporate guidelines, messaging and menus, the Moorhead shop still operates mostly under the terms of a contract signed in 1949. And that allows owners Troy and Diane DeLeon the freedom to dish out what might be considered rogue menu items.
There's the Mr. Maltie, a chocolate malt on the stick; the Monkey Tail, a chocolate-covered frozen banana; and of course the Chipper Sandwich, which is vanilla ice cream sandwiched between two chocolate chip cookies and dipped in chocolate.
The DeLeons also offer unique toppings, some of which have been discontinued by headquarters, as well as non-corporate approved food items, including barbecue sandwiches and Polish sausages. And the ice cream cakes? Let the other shops take HQ's premade cakes; Troy DeLeon assembles his himself.
"If we changed to the new corporate way, virtually all our food items would be gone," said Troy DeLeon, who took over the store in 1995 from original owner Bob Litherland, who also was considered something of a company maverick. "The corporate way is everything exactly the same."
DeLeon has said that corporate would like for his store to melt away, which drew a chuckle and a "no comment" from company spokesman Dean Peters. The Minneapolis-based chain — which launched in 1940 — values all of its more than 6,500 locations, Peters said, and it "understands and appreciates" the heritage and popularity of the downtown Moorhead Dairy Queen.
However, Peters said the company cannot promote the store "as a brand and a system," and added that most DQ lovers are looking for uniformity and the indoor dining experience provided by the company's newer DQ Grill and Chill restaurants.
"That's what our fans are telling us they want and that's what we are trying to provide them with," Peters said.
Mind you, the Moorhead store still plays the corporate game. To a degree. The lineup of typical DQ treats is featured on the window. But nearby is a "Local Menu" sign that includes a Nathan's-brand hot dog for $1.50, a bowl of chili for $2, a large Polish sausage for $2.75 and the super chili cheese dog for $4. Another poster promotes a "Curly Shake," which is advertised as a shake with a sundae on top, for  $3.25 $3.25.
Peters said a small percentage of Dairy Queen stores around the country have contracts dating back to the 1940s. He said those contracts allow for "very limited" products to be sold that are not available at most locations.
Customers at the DeLeons' restaurant are welcome, if not encouraged, to order treats just the way they like them. For example, Moorhead Mayor Del Rae Williams said her son likes the Crunch Blizzard, but substituted with chocolate ice cream.
"We'll do whatever. It doesn't take any longer," DeLeon said.
Said Williams, "People feel like it tastes differently and they give better service. Where else would you mind standing in line? It has become an experience in our community. It's very personalized and people know it."
DeLeon said he has been encouraged by corporate lawyers to enter into a new contract, but there "aren't enough zeroes" that could convince him to dump the flavors and feelings customers like Diann and Leroy Mikula have enjoyed for decades.
"They come here almost every day, like a lot of customers," Troy DeLeon said. "We want people to take a step back in time and experience something they don't get a chance to experience very often."

Posted by Michael McGraw - www.Local-Artist-Interviews.com at 7:37 AM No comments: