If I was going to the University of Minnesota, I'd eat my meals at Bona Vietnamese, and have dessert at DQ a block away on Washington.  For those who cannot tell, I like the DQ.
This is a no frills DQ--just a place to stand to give your order, maybe one or two tables, and that's about it.  When I ordered, The music was loud and appropriately alternative, most likely channeling The Current.  The workers were cleaning stuff up and took a few moments before they noticed me.  In the meantime, I noticed that they served personal-sized DQ cakes.  This is a magical idea.  Keep the gel frosting off it and I'm buying one regularly.
I ordered my usual small cone ($1.69) and watched the server lady make my cone.  The cone machine sputtered out white fluff.  My cone ended up being the oddest shape: 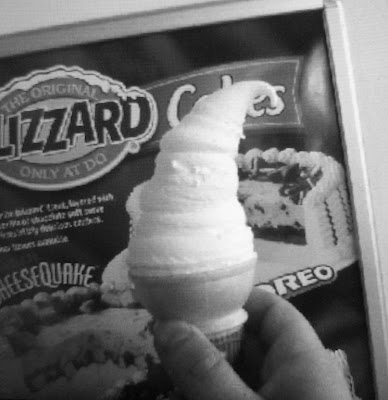 The Cone Artist asked if I wanted my mal-formed cone or if she could try again.  I took the mal-formed cone because it was funny looking and wanted to take a picture.  It was a pretty bad cone--too fluffy.  In talking to my father about my reviews, he said he doesn't like when the ice cream doesn't seem cold--that's what was going on here.  There was not enough moisture content for the appropriate chill.  I don't know why this happens, but I'd prefer it didn't.
Still, If I were a U of M student, I'd give them a second chance to do things right.
Small vanilla cone: $1.69
Medium: $1.99
Large: $2.29
Posted by Michael McGraw - www.Local-Artist-Interviews.com at 7:39 AM

Labels: U of M DQ Washington and Oak

happened to the ice cream because the staff let air into the machine. Let mix run dry-- not paying attention.